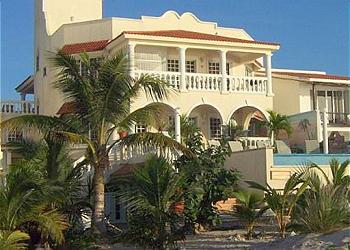 Imagine yourself in one of those beachfront villas/ mansions you see built on the sandy beach on the south side of Cozumel; only a 2-minute boat ride away from the most awesome reefs in the world. Well, if you were staying at Villa Dos on Cozumel, you wouldn't be imagining anything.
Guest Book:The place is breathtaking! We stayed at Villa Dos for 7 days during the middle of the summer. The beach right in front of the house was awesome and the tidal pools were great, and so was the saw an eel! We loved the pool, afternoon breezes, and the views and walking on the beach were to die for. We enjoyed margaritas on the outdoor bbq center each night. I also used the internet access to get work done when everyone else was sleeping. This was the first vacation I have ever taken where I felt refreshed and also got enough work done to not be overwhelmed upon returning home. wrote by: anonymous


Villa Dos is located in an exclusive area 9 miles south of town called San Francisco beach. Dive Boat Pick-up, umbrellas, beach floats, kayaks, catamaran sailing, parasailing, and snorkeling gear and snorkel trips are available at nearby beach clubs. You will find the laid back town of San Miguel 15 minutes to the North.
(You can walk for miles on the endless sandy white beach.)
FREE LOCAL CALLS plus FREE LONG DISTANCE CALLS TO THE US AND CANADA AND FREE HIGH SPEED Wi-Fi INTERNET, FULLY AIR CONDITIONED, MAID SERVICE INCLUDED.
Villa Dos is a 5 -6 bedroom, 7 bath luxury oceanfront villa with... 3 king sized bedrooms and baths + 1 bedroom with 2 queen sized beds and bath, + one bedroom with one queen bed and bath, + and one daybed area with 2 twins which can convert to a king if needed, or just the 2 twin beds plus it has its own bath upstairs on the main level. Villa Dos is for rent to large or small groups... If you don't have a large group, we can actually lower the price and make it affordable for just a couple of people, or a small family to rent; or if you have an even larger group and need additional space we can offer you 2 additional houses.. located side by side next to Villa Dos. Villa Dos is comprised of living/bedroom areas, (some with their own entrances) surrounded by large outdoor areas which can be easily used by a group or family or recommend Villa Dos is very well suited for groups of 12, and there is comfortable sleeping place for 14 guests. Various areas open onto either the oceanfront swimming pool, a lush garden and large patio or a flower-filled tile-covered terrace and of course the sandy beach and the ocean.

Flexible Rate... according to number of guests.
Because of the nature of the furnishings collected by the owners over the years; no children under 10 years old. In order to maintain the villa and keep everything in the best condition, this villa has the owners onsite in addition to two caretakers. If the owners are not present then an English speaking person will be provided to greet you at the villa.

Reviews for this property

Check in after 3:30 PM (possibility to leave luggage in from )

Check out by 11:30 AM (possibility to leave luggage in until )

Code locks or personal welcome allow you to go directly to ...

Approximate floor plan of this property 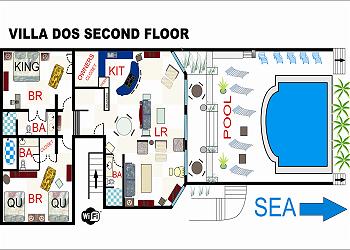 Approximate floor plan of this property 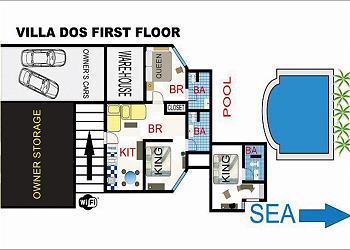