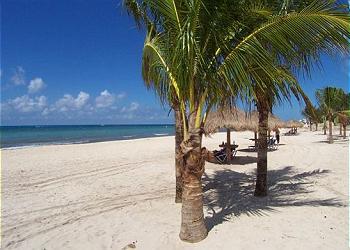 UNDER NEW OWNERSHIP! NEWLY RENOVATED 2 bedroom 2 bath Residencias Reef 8180 has all you could want at the right price! Owners just revamped the whole unit for your pleasure. Located in Building #4 on the ground floor this unit has all the comforts of home and more. Enjoy this piece of paradise in the most popular condo development in Cozumel! Spend your days walking the sandy beach or lounging at one of the 2 heated pools and the nights watching the most amazing sunset you have ever seen. Just a 5 minute boat ride to some of the greatest reefs, it's perfect for beachcombers. There's also good snorkeling just off the beach. And that beach stretches on for miles and miles so you can run or jog for as long and as far as you like.

This unit offers maid service 3 days a week and is fully air conditioned. Bedroom 1 has a king bed and a sleeper sofa. Bedroom 2 has a king bed as well. There is also a sleeper sofa in the living area. The condos are located about 9 miles south of Cozumel's only town, San Miguel. This unit is up one flight of stairs and down another. Once inside you are located on BEACH level.

Reviews for this property

Check in after 3:30 PM (possibility to leave luggage in from )

Check out by 11:30 AM (possibility to leave luggage in until )

Code locks or personal welcome allow you to go directly to ...